The first time George Harrison saw a sitar was on the set of Help in April 1965. A group of Indian musicians had been recruited to add an authentic Indian ambience to the restaurant scene. They played a a Beatles medley ('Another Hard Day’s Night') using  sitar, flute, tabla, ghunghroo and tanpura.

Listening to session musicians cranking out Beatles covers was a not particularly novel experience for the group. India was, however, one of the few countries that bypassed Beatlemania. It had its own musical traditions and Harrison was fascinated by the instrumentation he heard

Over the next few months Harrison began researching traditional Indian music. He  discussed his new interest with David Crosby, who toured the UK with The Byrds in August 1965.  Crosby told him about Ravi Shankar, then virtually unknown outside India. He also lent Harrison a Shankar LP that he 'carried in his suitcase'.

It was love at first listen for Harrison. He immediately ordered his own sitar and began experimenting with it.

Learning a completely unfamiliar instrument in an alien musical tradition provided a daunting challenge. To his credit, Harrison approached the task with the same determination that characterised his mastering the guitar. 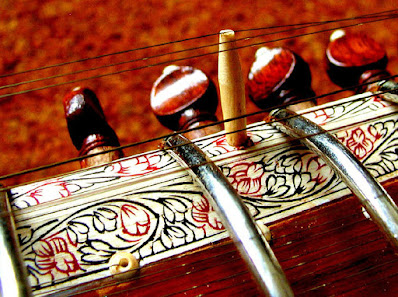 George introduced the sitar to the other Beatles. By October 1965 he felt confident enough to use his new instrument during the recording sessions for  'Norwegian Wood'. This caused serious technical problems as the sitar's sound levels were not adjusted to the other instruments.

Resolving this issue meant trial and error and several takes. Harrison later said this process had been "quite spontaneous from what I remember", adding, "We miked it up and put it on and it just seemed to hit the spot". This is not quite how the Abbey Road studio technicians recalled the process but the final result did indeed 'hit the spot'.

'Norwegian Wood' is not the first pop song to display an Indian influence. The George Martin produced comedy hit 'Goodness Gracious Me' (1960) may claim that distinction, at least in intention. 'Ticket to Ride' also included a raga-like drone, as did The Kinks 'See My Friends'

Where 'Norwegian Wood' did break new ground was in the use of a genuine Indian instrument on western pop song.

In today's more censorious climate, The Beatles might be accused of cultural appropriation. Indian instrumentation was, however, thematically consistent with the concept of Rubber Soul. The album title openly signals a sound that draws on other traditions.

At the time, Harrison's passion for all things Indian was assumed to be a passing one. In fact, it would stay with him for the rest of his life. Musically he began to work towards creating music that could genuinely claim to be in the Indian classical tradition.

He would first achieve this aim with Love You Too on the following Beatles album, Revolver