Why was the Walrus Paul'? 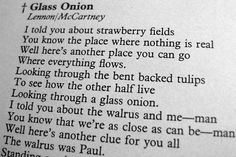 John Lennon cheerfully admitted that he had had 'no idea' who or what was the 'eggman' was in 'I am the Walrus'.
He then muddied the waters in Glass Onion with the baffling couplet: 'Here's another clue for you all. The Walrus was Paul.'

Eh? What's he talking about? In the 1971 Rolling Stone interview, John explained what he was trying to say:

But it doesn't sound very affectionate.

The 'sour A minor melody' and snarling tone of the song suggests a different message. Glass Onion is a sullen two-fingered gesture against the listener ('you all').


What did Paul think?

Interestingly, Glass Onion was a genuine collaboration between John and Paul. The theme (an attack on the 'pseuds' over-interpreting Beatles' lyrics) sounds typical of Lennon but in fact came from McCartney. Their relationship was fraying but here they come together in a howl of complaint.

The result was not appealing. As Ian Macdonald observes 'Glass Onion'  says less about the credulity of pop fans than the self-regard of pop stars.'