October 02, 2019
Early Lennon & McCartney songs contained few direct references to their home city. The aim was to produce music that would appeal to a global rather than local appeal. The culmination of this approach was I Want to Hold Your Hand - written  with the express intention of appealing to the US market.

The formula worked - I Want to Hold Your Hand became the biggest selling single of all time. It was however, limiting artistically. By 1965, The Beatles success - and that of the openly introspective Bob Dylan - encouraged Lennon & McCartney to draw on more autobiographical material.

In My Life Lennon refers  generally to the 'places I remember'. Strawberry Fields Forever, names one of these, a local Salvation Army Children's home, and weaves it into a hallucinatory dreamscape. On the surface McCartney takes a more functional approach: 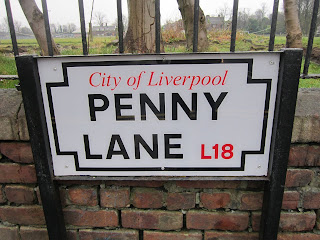 Penny Lane" was kind of nostalgic, but it was really [about] a place that John and I knew ... I'd get a bus to his house and I'd have to change at Penny Lane, or the same with him to me, so we often hung out at that terminus, like a roundabout. It was a place that we both knew, and so we both knew the things that turned up in the story.[9]

Lennon always spoke dismissively of what he called 'Paul's story songs'. Yet he would later concede that Penny Lane was one his partner's finest, a strangely moving tribute to their shared memory of an ugly bus stop.