What were the 'clues' on the Abbey Road cover? 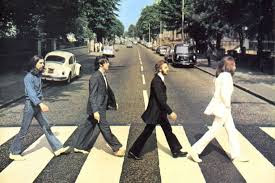 There were conspiracy theories long before the internet. The Beatles, with their unprecedented fame and influence on popular culture, were particularly prone to them. Perhaps the most notorious began on  the night of January 7, 1967, when  ‘a rumour swept London that Paul McCartney had been killed in a car crash on the M1’. - read the full story here.

On 12 October, 1969 a bizarre on-air phone call to Detroit radio station gave new life (!) to the controversy. A caller, identified only as ‘Tom’, had some startling new information. He revealed that The Beatles had been sending secret messages through their recorded songs.
‘Play ‘Revolution 9’ backwards,’ he said mysteriously. ‘And you’ll hear what I mean!’

Clues
In 1969, the story got a new lease of life. A Michigan University student published an article: “McCartney Dead; New Evidence Brought to Light”. The article built a pretty spooky — if not quite legally watertight — case for suspicious minds.

Most famously it drew attention to ‘Paul’ crossing Abbey Road on the album cover barefoot. And walking barefoot — as every conspiracy theorist agreed — was a scientifically proven symbol of death. McCartney later would protest that he was shoeless because of the August heat. The photographer - who took the photo standing on a stepladder while they held up the traffic -  confirmed Paul's explanation. But by this point nobody was listening.

Other 'clues' are also problematic: