Which Beatles song was directly influenced by Bach? 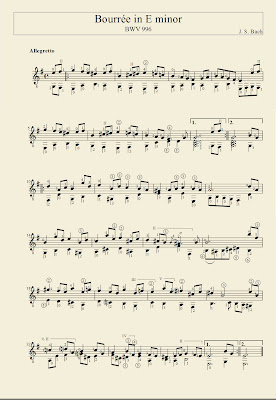 During their early musical education, The Beatles steered clear of classical music. Paul tells how his father 'a jazzer' would pointedly turn off the radio when a classical piece was broadcast. His son metaphorically followed suit, as did his bandmates. It was not for them.

Bach - but not as he wrote it

George had, however, learned one classical 'party-piece' at an early age. He did not know the title but had the vague idea that it was by Bach. George then taught this partial, inaccurate version of  Bourrée from the E Minor Lute Suite, to Paul. Here it is played according to original score:
In 1968 McCartney used the Bourrée as a starting point for what would become one of his most admired compositions.
Would Bach have been due a Chiffons-style copyright infringement payday if he had had hung around for another 240 years? It seems very unlikely.
McCartney acknowledges that Bach provided the 'original inspiration' for Blackbird - but argues that musically he took this  'somewhere else'. And as Aaron Krerowowicz points out McCartney was  developing  'his own version of the Bourrée rather than the Bach original'

'Reverse engineering' music the admired was a key feature of the Lennon-McCartney songwriting  methodology. Please Please Me, for example, was initially Lennon's attempt at producing a typical Roy Orbison ballad. It does not sound like the Big O on the final recorded version but that is where it started.

Similarly, though the Bach connection may not be immediately apparent in Blackbird, it is there in the musical scaffolding

Part of its structure is a particular harmonic thing between the melody and the bass line which intrigued me. Bach was always one of our favourite composers; we felt we had a lot in common with him... I developed the melody on guitar based on the Bach piece and took it somewhere else, took it to another level, then I just fitted the words to it.