Who was Dick Rowe? What was his bad decision? 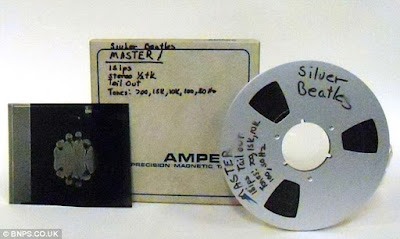 1962 would be the key year in the history of The Beatles. But it got off to a very bad start.

In the early hours of New Year's Day they drove  to London. They were heading for an audition at Decca Records - then the most prestigious record company in the UK. After battling through a snowstorm they finally arrived the studio at the appointed time of 11.00 - only to find that there was nobody there to meet them.

Then they were told that they could not use their own amplifiers.

But the session went ahead?

Over the next hour they recorded the following songs, which included three Lennon and McCartney originals:
The Beatles did not perform well. They were tired and cold and using unfamiliar equipment. They also got no help from the studio itself - no guidance from the producer or overdubs to clean up the sound. Nonetheless sub-standard Beatles was still - The Beatles.

Two versions:
1) According to legend, Decca A & R chief Dick Rowe told Brian Epstein that 'guitar groups were on their way out'.
2) According to Dick Rowe, it came down to a choice between two bands;

I told Mike he'd have to decide between them. It was up to him - The Beatles or Brian Poole and the Tremeoloes. He said, 'They're both good, but one's a local group, the other comes from Liverpool.' We decided it was better to take the local group. We could work with them more easily and stay closer in touch as they came from Dagenham."

So Decca chose to save on petrol. Easier all round. And The Tremeloes went on to have two number ones and a number of minor hits. As for The Beatles - well what happened to them?