Which Beatle came from the most musical family?

None of The Beatles came from families where early piano or recorder lessons were then norm. Music came into their lives via  he radio and records played on primitive players. Classical music was consciously avoided - the radio would be switched over or off when it came on in the McCartney home.

Musical instruments were around, but not learned in a systematic way. Julia Lennon played banjo and occasionally sang in local pubs.  A lodger did provide John with a harmonica, which he intermittently played when he was young. Ringo had to make do with a toy drum proveded by a kindly hospital visitor. 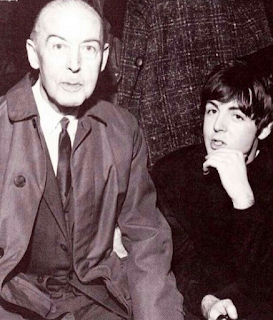 Generally, music was seen as a diversion, rather than a potential source of income. The major exception was Paul’s father, Jim.,
Jim McCartney sang and gigged in local ragtime groups and  his work’s brass band. He had taught himself various instruments including the piano, double bass and the E-flat tuba.
This musical curiosity was passed down to his two sons. They grew up watching their dad practise piano in the front room — and Paul dabbled with the instrument from early childhood. His father would also use old 78s to demonstrate harmonization: how instruments and voices interacted.
Jim also bought Paul his first instrument — a trumpet — for his fourteenth birthday. By this point he appears to have grasped at least some musical theory
How The Beatles learned to play