How were The Beatles introduced to marijuana? 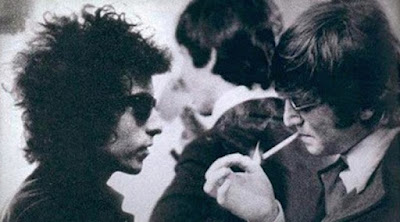 The Beatles first met Dylan during their second visit to the US in August 1964. He came to visit them  in their suite at the Delmonoco Hotel in New York, accompanied by his friend Al Aronowitz.
Eager to please their super-hip guests, The Beatles offered Dylan and champagne and amphetamines. Dylan said that he only drank cheap wine and suggested that they ‘smoke some grass’

Brian and the Beatles looked at each other apprehensively. “We’ve never smoked marijuana before,” Brian finally admitted. Dylan looked disbelievingly from face to face. “But what about your song?” he asked. The one about getting high?”
The Beatles were stupefied. “Which song?” John managed to ask.
Dylan said, “You know…” and then he sang, “and when I touch you I get high, I get high…”
John flushed with embarrassment. “Those aren’t the words,” he admitted. “The words are, ‘I can’t hide, I can’t hide, I can’t hide…'”   From The Love You Make Peter Brown

In fact,  according to George Harrison,The Beatles had tried it before, soon after their first trip to  Hamburg.

We first got marijuana from an older drummer with another group in Liverpool...I remember we smoked it in the band room in a gig in Southport and we all learnt to do the Twist that night.

Everybody was saying, ‘This stuff isn’t doing anything.’

This was in line with their expectations of a drug they associated with beatniks and what Lennon dismissed as ‘trad jazz in Marks and Spencer cardigans’.

Dylan rebranded the drug for them. Now it became a symbol of the counter-culture and they became enthusiastic weed ambassadors. The filming of Help the following year was completed in a 'haze of marijuana'. Arguably this is apparent in the film itself, an incoherent if entertaining shambles.
Moving to marijuana from a reliance on alcohol undoubtedly helped take the edge off John's aggression. Perhaps surprisingly, however, Paul who proved the most passionate of advocate of dope smoking.
In an uncharacteristically zany move McCartney even wrote a homage: GOT TO GET YOU INTO MY LIFE. Wisely, he kept quiet about the song's lyrical inspiration for a couple of decades.