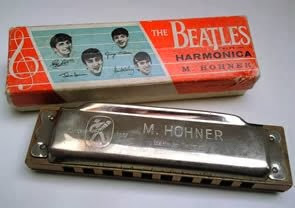 "I played a lot of harmonica & mouth organ when I was a child. We used to take in students and one of them had a mouth organ and said he’d buy me one if I could learn a tune by the next morning. So I learnt two." John Lennon John Lennon Remembers

In 1947 Aunt Mimi began an arrangement with Liverpool University to take in students as lodger. One of these young men was Harold Phillips, who was resuming his studies after serving in the Royal Navy.

The seven-year-old John was fascinated by a harmonica that Phillips possessed. Phillips was amused and offered the boy the chance to keep the 'mouth iron' - as it was known locally.

Harold Phillips kept his word - but Aunt Mimi made John wait until Christmas before taking possession of his first musical instrument.

‘I felt the stocking and there was a mouth organ in it. A harmonica.’ That was one of the great moments of my life, when I got my first harmonica’.

Interestingly, the harmonica had been played by his father and all his paternal uncles. It was also an instrument particularly suited to his musical strengths - a sense of time and rhythm. An added bonus was that it allowed him to be improvisatory without a formal understanding of musical theory.

John's harmonica playing was a key feature of several early Beatles tracks - most notably on Love Me Do and Please Please Me. By 1964 however, he was becoming increasingly wary of using it as a lead instrument.

Another reason why it became personally embarrassing for Lennon was that Bob Dylan was so closely associated with the instrument. His musical relationship with Dylan was always uneasy.

The harmonica was never fully put away, however. It plays a striking role in driving 'I Should Have Known Better' and is present on several later tracks, including Rocky Racoon.