Why did John & Yoko get married in Gibraltar?

October 28, 2021
The famous image of John & Yoko standing in front of the Rock of Gibraltar was very much on brand. What greater symbol of the eternity of their love? It was, however, a wedding location chosen out of necessity rather than a carefully thought out mission statement.
The decision to marry was taken spontaneously, though it did occur on the day following the wedding of Paul and Linda. Not that the future Lennon-Onos attended - none of The Beatles did. But on the way home from Mimi's they decided to follow suit - immediately.
There were a few hurdles to overcome. They wanted to marry abroad but did not have their passports with them. Other proposed venues - like Paris - had boring rules and paperwork.
Gibraltar, very much in the UK. It was, perhaps, un poco provocative to describe it as  'near Spain' but legally that was pretty much the case. So the Rock rocked as far the bride and bridegroom were concerned. Among those less thrilled were Cynthia Lennon and General Franco 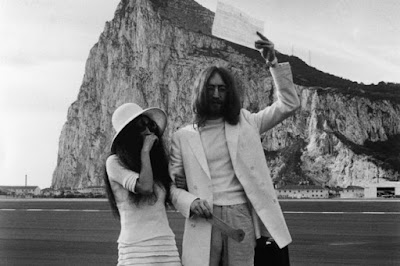 The Caudillo promptly banned the The Ballad of John & Yoko across the jurisdiction of the territory he did control.